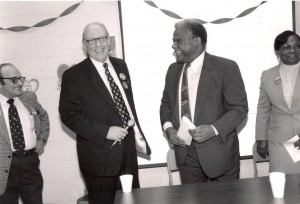 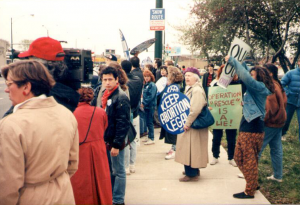 Click Here to view the trailer edited by Elizabeth Schoell.

About the film
The documentary celebrates the love, life, values, and social justice partnership of Ann and Don Benedict. Ann and Don touched the lives of thousands  through their commitment to social justice. They have a lifetime of fighting for what is just. The documentary shows the challenges that this generation fought for through the eyes of the current generation. Currently the film is in post production. To see the trailer please click here.

Elizabeth Schoell (editor)
When she is not editing videos or walking dogs, Elizabeth is trying to figure out ways to create entertainment that brings people, ideas and the world together. As a former New Yorker she worked full-time in a media saturated world and has found insane pleasure in discovering ways to utilize video and sound to get our communities off our computers instead of on them. With 5 years experience as a radio DJ, 2 years in marketing research, and 1 year working as a social worker in Chicago’s Garfield Park neighborhood, she has finally found her voice in a career as a freelance video editor. With a portfolio that is constantly growing with commercial, nonprofit and experimental films, she could not be more confident that her goal to bring us together via a universal language is coming closer.

Don Benedict
Don was born in Detroit Michigan in 1917, spending his childhood in Ohio and Tecuseh Michigan. He graduated from Albion College in 1939 and soon after went to Union Theological Seminary. After one year in Seminary he refused to register for the draft due to his pacifist beliefs and was sentenced to a year and a day in prison. When released he moved to Detroit establishing an interracial food co-op, where he met Ann C’nare. After being sent back to prison the second time, he made the decision to enlist in the army due to his experience witnessing the atrocities of the Detroit race riots and finding out more about the Nazis genocide. After the service he and Ann married and moved to East Harlem and was one of the founders of the East Harlem Protestant Parish also referred to as the Group Ministry. Later they moved to Cleveland to establish the West Side Parish. In 1960, they moved to Chicago to become Executive Director of the Community Renewal Society where he worked for twenty-two years. In his retirement he founded Protestants for the Common Good as a counter to the religious right and organized against police brutality in Chicago. He died on in 2008 just before his 90th birthday.

Ann Benedict
Ann was born in Madison Wisconsin in 1922, however she spent a lot of her childhood in Detroit Michigan. She attended the University of Wisconsin, but had to transfer to Wayne State University because of financial trouble. After completing her degree she moved to Detroit to work on neighborhood playgrounds with children, working to buffer racial tensions. This is where she met Don and soon after, married him. They moved to New York so Don could finish his education. While they were establishing the East Harlem Protestant Parish, Ann worked with teenagers, new mothers and on early childhood education. She also became a support person for the women participating in the Group Ministry. In Cleveland at the West-side Parish she also worked on similar issues however focused much of her attention on raising their four daughters. After moving to Chicago, she did graduate work at the University of Chicago and Roosevelt University. She continued her activism on a variety of paths including teaching the hearing impaired at Whitney Young High School, organizing to pass the Equal Rights Amendment, and establishing the Religious Coalition for Abortion Rights. Currently she lives a quiet life in Logan Square, spending time with her family.